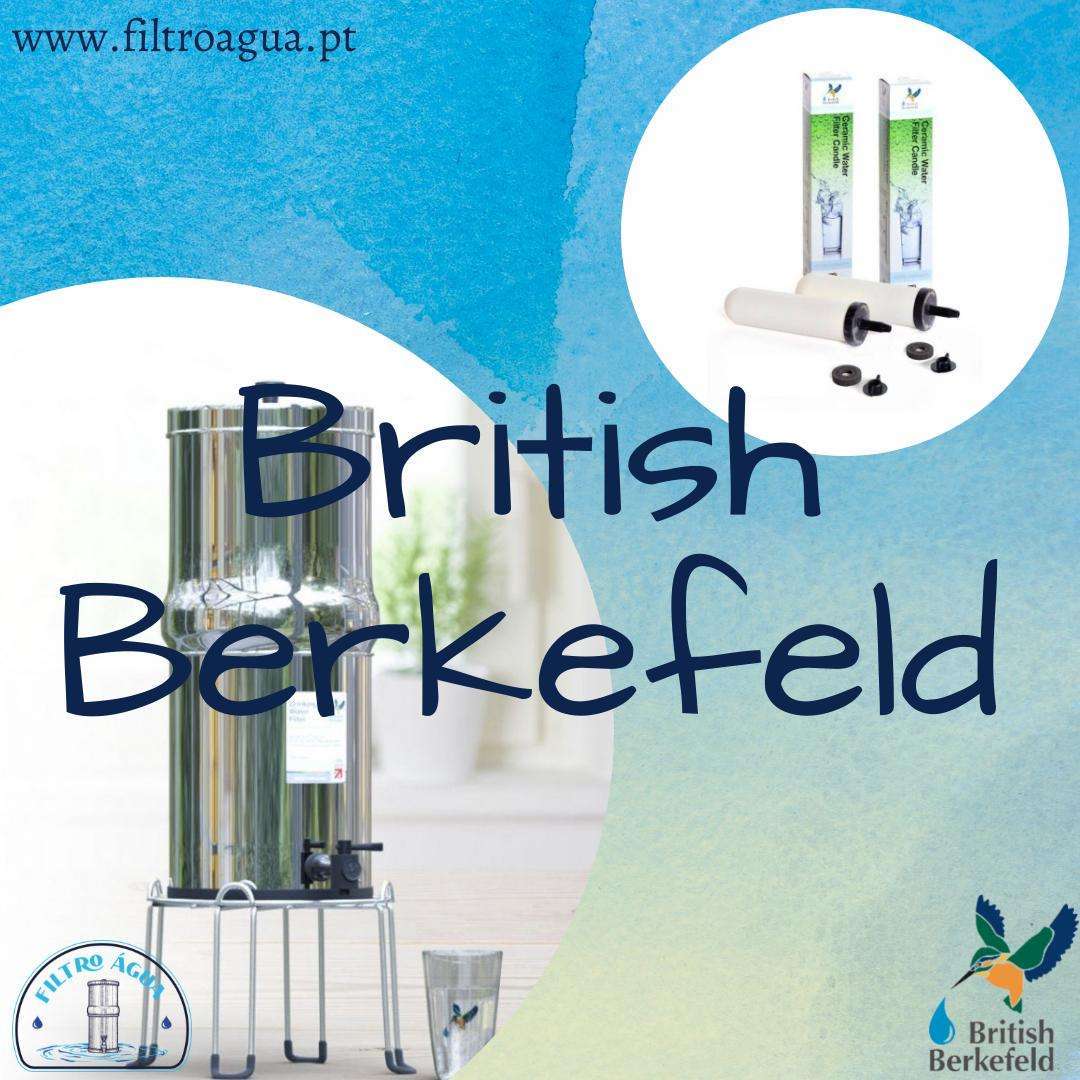 You may have already invested in a high-quality British Berkefeld water filter, or perhaps you are considering whether to go for it. Whatever your situation, you might be wondering exactly what this countertop, stainless steel filter does – and what makes it a valuable addition to any household or office. Read on, to find out just what it removes – and how it makes sure you have access to safe and delicious drinking water. Read this “British Berkefeld and five contaminants it removes” article to make a better purchase decision!

How does a British Berkefeld work?

The British Berkefeld is a counter-top, stainless steel gravity water filter. This means it works simply using the properties of gravity. Unfiltered tap water is poured into the top container, to a level which covers the filter ‘candles’ but doesn’t spill over. This water then drips down into the bottom container, where it can be accessed via a tap whenever you need clean water.

But what exactly is ‘clean’? How is different from the untreated water placed into the top? Let’s find out…

When Henry Doulton created the ceramic water filters back in 1827, it was because the River Thames in his hometown of London was unsanitary. Raw sewage was regularly tipped into it, and citizens consequently became ill with cholera and typhoid. Henry Doulton’s filters cleansed this water and made it safe to drink.

Such was the success of his premise, that Queen Victoria asked him to create a bespoke water filter for her – and today, the very same micro-porous ceramic cartridges that were fit for a 19th-century queen are used in British Berkefeld filters. Indeed, this brand of filter is now the preferred choice in areas where epidemics are linked to the area’s undependable water supply.

Water can easily become contaminated with bacteria, especially in the right conditions and temperatures. The British Berkefeld filters out these uninvited extras, such as Salmonella, Dysenteria, E-coli, Cholerae and Giardia. As the British Berkefeld also comes in smaller sizes, such as the 8-litre British Berkefeld water filter, it means it is portable – a great solution for trips away or camping weekends in the wilderness, where you’re unsure of the water supply.

We all want to know that our drinking water is pure – and certainly free from residues of pharmaceutical products. Contaminants from agriculture such as the commonly used pesticide atrazine, or products excreted from patients taking pills (and even farm animals who are routinely medicated) routinely find their way into the water supply. What’s more, as they are soluble, it can be a challenge to eliminate them. Thankfully, the British Berkefeld filters over 99.9% of atrazine contaminants, lindane (found in pesticides and in lice remedies) as well as benzene, which is a known carcinogen. 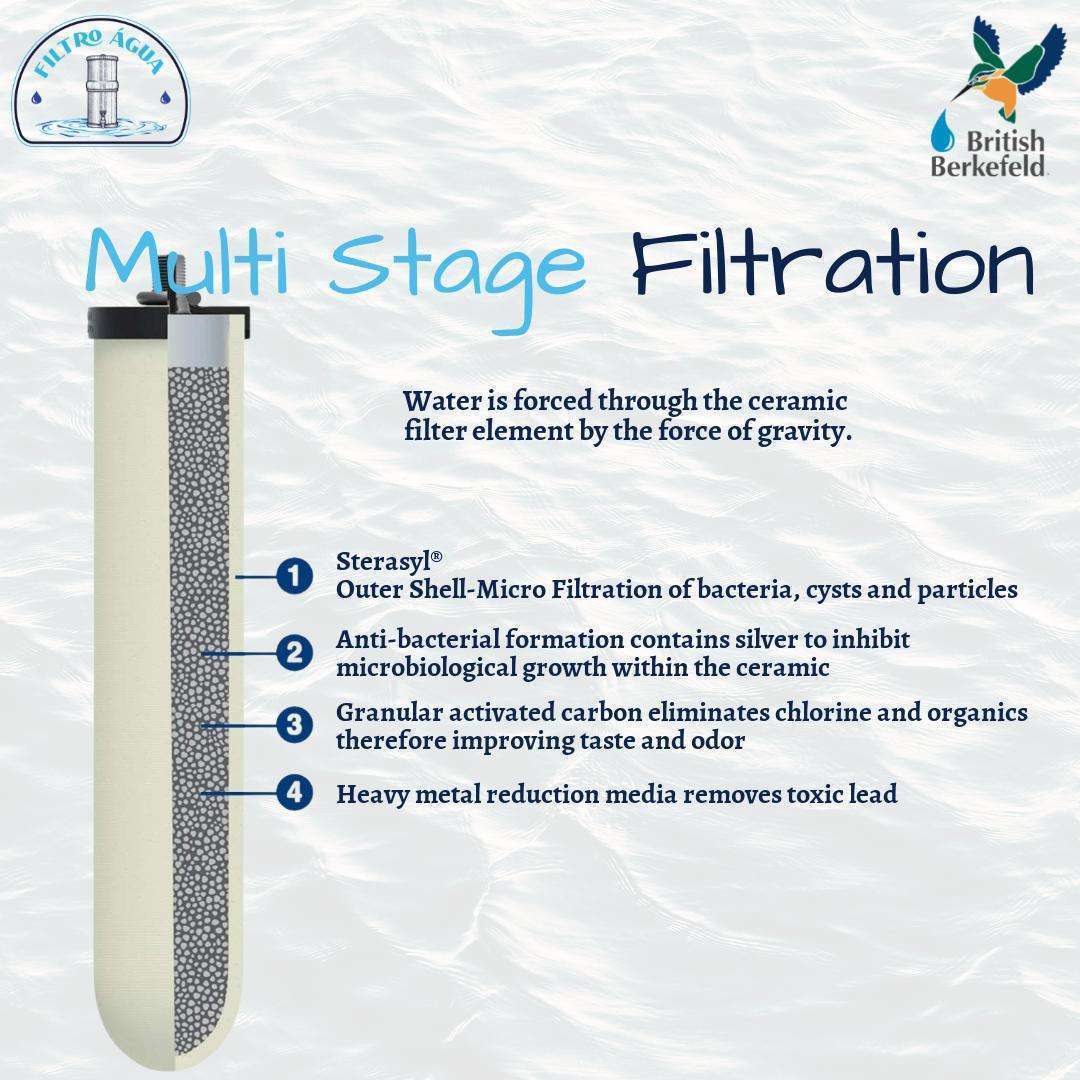 You might have heard of BPA, or Bisphenol A. It’s an industrial chemical and it is found in plastics and resins. Often, it’s used in the type of plastic used to store water – and this unfortunately means that it is leached into bottled water. Many of us think of bottled water as – by definition – safe to drink. However, much recent research has shown that these leached traces of BPA can, over time, lead to possible health consequences.

Exposure to BPA can be particularly detrimental to pregnant women, infants and children – with some research even highlighting a link between BPA exposure and negative behaviour. There’s also evidence pointing toward a link between BPA and elevated blood pressure, as well as heart disease.

Luckily, the British Berkefeld water filter can remove these potentially damaging traces of micro-plastics effectively, which means you can be assured your drinking water is free from BPA.

The contamination of drinking water with heavy metals, including lead, is considered a major health concern. These are some of the most difficult contaminants to detect, since they are odourless and colourless – and yet, lead is potentially very harmful to our health, and especially that of our children.

It is generally agreed that there is no safe limit for lead. Despite this, lead can find its way into drinking water relatively easily. This happens especially when plumbing materials – such as pipes, taps and other fixtures – corrode. This is more likely to happen in properties that pre-date 1986 and in older cities. Many of us live in older homes, and digging up the plumbing is rarely a practical option! Instead, a simple water filter – such as the British Berkefeld – can eliminate the anxiety of whether the water supply is contaminated with these harmful metals. 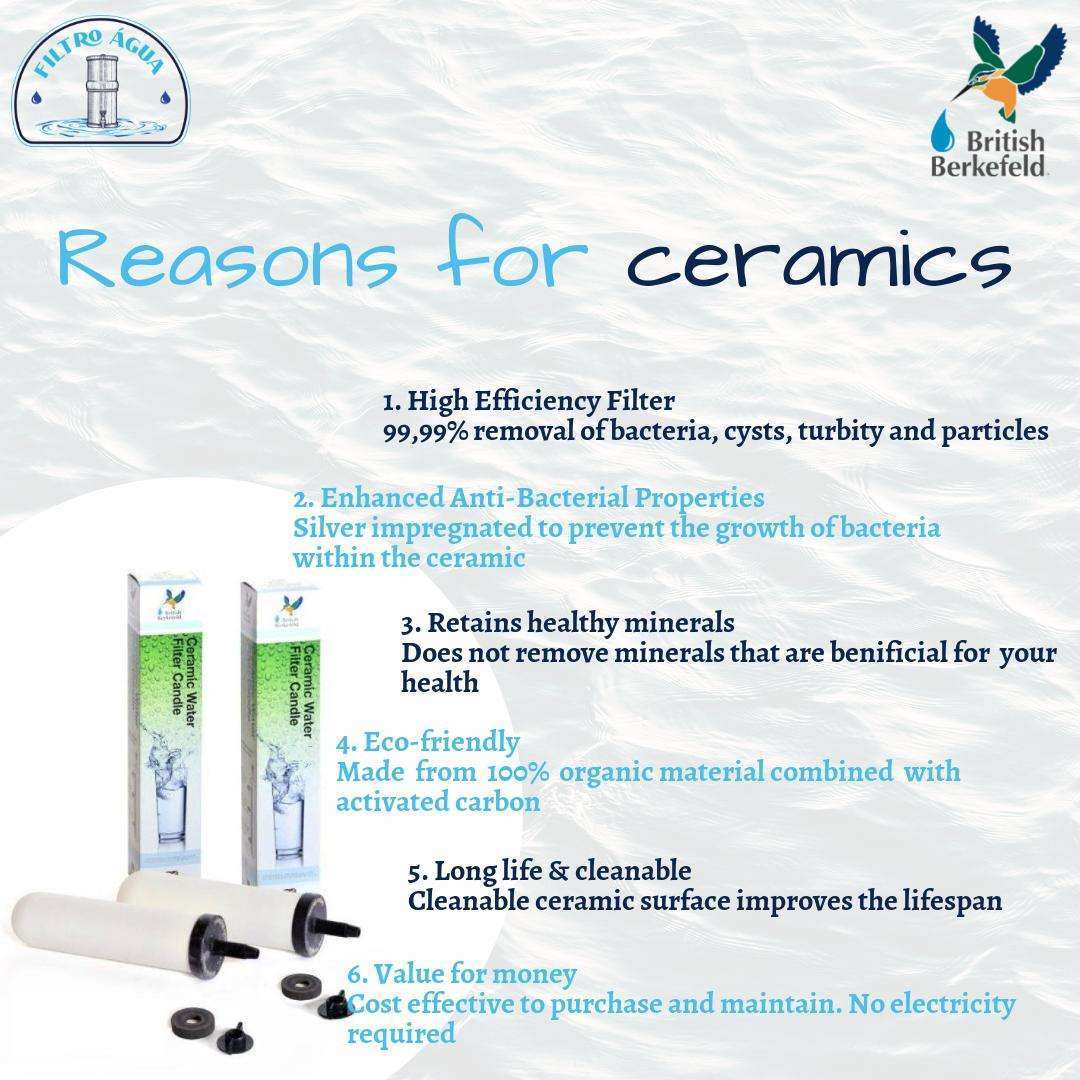 We all know how chlorine kills bacteria in the swimming pool, but do you really want it in your drinking water? Of course, none of us do. In high enough quantities, chlorine can cause stomach ache and vomiting, as well as itchy skin. While many municipalities add low levels of chlorine to kill off harmful bacteria, it results in an unpleasant taste that often renders tap water undrinkable. Happily, the British Berkefeld water filter removes this, too, ensuring your water is not only safe, but also tastes good.

The British Berkefeld water filter is a cost-effective method for delivering consistently safe water that tastes delicious, too! Happy filtering!

About the author : Filtro Água